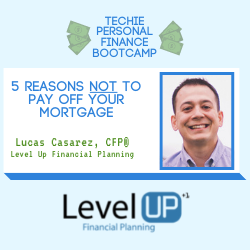 Reason number four, not to pay off your mortgage early is your 30 year mortgage payment is actually an amazing inflation hedge. So if you think about inflation, inflation means that the value of the dollar actually erodes over time.

It did it did disclaimer, alert this information is for education. So don’t just go use it first consult with your financial advisor, because that’s way more legit. So that was the Orlando Gomez and you can catch him his episode already dropped for this season. So go ahead and find it in your , techie, personal finance bootcamp podcast, find Orlando Gomez. And you can hear about how he broke into tech by writing a jingle.

And there’s five key reasons for that. Some of them might be obvious, might be ones you’ve heard of. There’s at least one that I know. It’s very rarely talked about and probably one of the biggest reasons why not to pay off your mortgage sooner than you need to.

Mortgages are definitely one of my favorite tools that people have access to. So credit cards is one of them. I made a whole episode on that at this exact time last year, cause I was cashing in some of my credit card rewards, but mortgages. Just as great super helpful at building wealth.

And so it’s just a, one of those reminders for you that not all debt is bad. You can mismanage using debt and there’s ways that it might not work for you if you don’t understand it completely. But a mortgage is definitely one of those great debts that could end up adding a ton of wealth for you and your family

and , just kind of quickly to recap on why mortgages even exist in that first place. Well, it’s not likely you’ll build a, to purchase a home in cash. Home prices increased faster than inflation, so it’s not like it’s only going up 2% a year, as far as home values, especially over this last handful of years.

Home prices are already high. So when you factor in a percentage of a very large dollar amount, it just ends up being a really big move in target, and you can cost yourself a lot of money. Thinking that. You’re going to save up to pay in cash because it’s just going to move further along. Just using a quick example saying hypothetically if a $500,000 home were to increase at 10%.

Well that’s going to cost you an additional $50,000 if you wait. So that’s definitely a big motivation to get a mortgage. Able to have a home that’s likely going to appreciate for you as long as you take care of it. And there’s nothing unique happening in your area that you make the purchase in. And the biggest thing with the home purchases, can you afford the monthly payments?

Is it putting too much stress on you? So make sure those things are going to be affordable. So moving forward, though, we’ll be talking to you as if you’ve already had a mortgage. And most of you probably do at this point.

So reason number one, not to pay off your mortgage. Interest rates are extremely low. They’ve been bouncing near the lowest ever.

And so it’s very likely you can find an interest rate for a mortgage at 3% or even lower. We close on our new home purchase a few months ago and we locked it in at 2.6, 5%. So just ridiculously low near free money at that low of interest rates,

reason number two, not to pay off your mortgage. Is, you may receive a better return on your investment, then make an additional payments to your mortgage.

So that’s what we’re talking about here. I’m not saying don’t make your minimum payment. You want to make your mortgage payment, but when you have excess funds and you think about where best, you can put that a lot of times a mortgage tends to be high up in consideration for a lot of people. You just want to weigh the facts of, well, what’s all going on in your situation.

And if you put it here, you’re going to guarantee yourself that you’ll save whatever percentage your mortgages. So hypothetically, let’s say 3%. If you pay an additional thousand dollars a month towards your mortgage. Above and beyond what your normal mortgage payment is. Well, you’re guaranteeing yourself a 3% return.

So that’s how you can look at that. But if you want to take a step back and think, well, is there a way that I might be able to get a better return with only taken on a reasonable amount of risk? That’s what you want to consider for this reason? Number two, reason, number three, this is probably the biggest one.

The reason why it makes sense to have mortgages in the first place.

So reason number three, not to pay off your mortgage early is you have other goals of balance. So maybe if the only thing you ever wanted to do in life was purchase a home or pay off your home and just own it completely outright.

Well, that means that it’s might be crowding out some space for some other goals, like travel, having a family, getting married, most things in life do cost money, or have some kind of money tied to them. And so. Too focussed on this. You might be giving up some of the flexibility and opportunity to be more diverse, have different experiences that you actually can do and afford if you don’t pay off your mortgage.

So aggressively. The kind of opposite. End of that is, well, you could definitely pour into your mortgage and pay that off and say, Hey, I’ll do that fun stuff for once. I don’t have any debt. Well, even if you do try to do that and pay it off really quick, it might take 10 years. So you’re just going to wait, put your life on hold for 10 years.

And a lot of situations, it doesn’t make the most sense because the time as we know with COVID. And any other kind of random experiences I have in life is we’re not guaranteed anything as far as tomorrow or next year or five years, 10 years. So you definitely want to enjoy life now, too, and kind of keep those things balanced.

So if you have a hundred dollars will buy next year, it might only be. $98. It’ll still say a hundred dollars, but you’ll only be able to purchase $98 worth of stuff we know today. So keeping that in your mind, as far as how inflation works, I’m just going to run through a quick example, and if you’re happy to be watching the video here, you’ll see how dramatic this can be.

Year one, let’s say use a hypothetical monthly payment of $1,600 a month. Well, just with a 2% inflation rate on average by year 10, even though you’re still making the same $1,600 to your mortgage payment for principal and interest that mortgage payment will only feel like 1,003, $107 today. So that’s that shows you the power of inflation and how.

How ridiculous. It could end up being over time, because if you think about inflation and one things that does help due is helps increase your income. If your income increases faster than inflation, then you’re actually doing way better than most people. But that’s, that’s an important thing to factor in.

And if we look this thing out even 20 years out, well, then it only feels like $1,068 that we know it today. And on average, if we looked and just made every single payment for the 30 year time period for.

Mortgage then it’s 1,235 is effectively what it would feel like in terms of money that we know and understand today of $1,235 a month.

And what this equates to, again, using that 2% inflation rate is the effective interest rate that you ended up paying when we factor in inflation is really only 1.8% or 1.08% actually. So it’s even lower than that. So even closer now to free money at that point.

So reason number five, not to pay off your mortgage.

And this one, I put it last because it’s, doesn’t apply to everyone. Something happened a few years ago in 2017 where the tax code was changed substantially where this used to be a bigger deal than it is now. That is that you may benefit from your taxes by having a mortgage. And you still may be able to, it just depends on if you’re able to itemize your deductions.

Most people do not itemize their deductions and that big change that happened in 2017 or at least one of the big changes was your standard deduction just went up extremely high. And that meant that a lot of people that had itemized before are no longer doing so. And if you think about what it takes to itemize, is it takes your.

State income tax. It takes your property tax. And it’ll take your mortgage interest. Those are the most common ones. If you are charitably inclined that also factors into those itemized deductions. So those are the five reasons I’ll kind of run through those again, just for clarity, but interest rates are extremely low.

So reason number one, you may receive a better return on your investment. That’s reason. Number two, you have other goals of balance. That’s reason number three. And the one that is very rarely ever talked about or mentioned is your 30 year mortgage. Payment is actually an amazing inflation hedge, and last, and maybe least is you may benefit on your taxes.

So hopefully all of that information is valuable to you as you kind of consider balancing your goals and objectives, as far as how you’re building your own financial strategy guide. And as always reach out to me, cause this is this kind of outside the box thinking is one of the things I think my client’s value is we’re not going to just look at things from one angle.

We’re going to look at all the pros and cons and just make a very educated decision at that point.