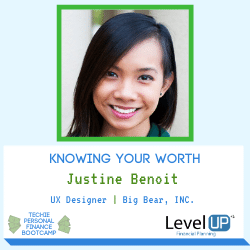 Justine is a UX/UI Designer and UI Developer on a mission to create a meaningful impact on people’s lives through her craft.

She was born and raised in the Philippines. In 2008, she and her family moved to Las Vegas, Nevada, where she attended the University of Nevada, Las Vegas, and received her B.S. in Entertainment Engineering and Design.

She moved to Texas with her husband the following year so he could pursue his career as an officer of the US Army. During their stay there, she worked as an AutoCAD designer for a civil engineering firm in Temple, Texas.

They returned to Las Vegas in 2015, where she was once again able to pursue her career as an Automation Technician at Cirque. This time around, she worked at the show “KA”. She had a magical 3 years at the show, but the late nights and working on weekends and holidays made for a lifestyle that was not sustainable for her. So in 2018, she decided to pivot careers and pursue one that would allow her to chase both passions in art and technology, and that is UX Design.

Beyond her skills and experience in human-centered design and UI development, she possesses a drive for learning, creative problem solving, and making a difference in peoples’ lives. Outside of her UX/UI work, she is a wife, a mother, and a writer. She also enjoys good food, good whiskey, good music, and puppies.

Summary of the interview topics: