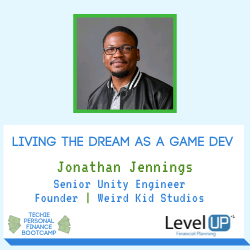 Jonathan Jennings is a software engineer who works in the AR, VR, and videogame spaces and currently helming his indie VR game at Weird Kid Studios named Galactic Bar fight.

He’s been a guest lecturer at University and National Conferences. His first published essay Black Unicorn is available to read in the book Game Devs & Others: Tales From The Margins.

He has over 9 years of development across both games and VR / MR / AR applications experience and titles he has worked on have had over 2 million cumulative downloads across several platforms. When not working he is most likely playing and studying the latest giant mainstream release or an obscure indie game.