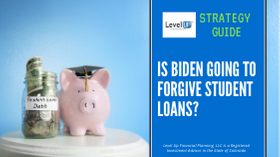 President-Elect, Joe Biden, is projected to win the US Presidential election. With his win could come significant changes. One of the changes that are on the top of many US citizens is student loan forgiveness or the popular hashtag #CancelStudentDebt.

Up until Monday night, it wasn’t Joe who was driving the conversation. Instead, it has been other members of the Democratic party who are known to be big supporters of student loan forgiveness. The most popular numbers from those members range from $50,000 to all student loans. Again, so far, these numbers are not tied to the number that Biden himself has mentioned.

I usually don’t like to comment on hypothetical scenarios, especially when it involves political promises or expectations, but due to the very real student loan repayment strategies you may be able to implement.

I wanted to share the current events and my thoughts.

Currently, Federal Student loans have been in forbearance ever since COVID hit. This has meant that you were not required to make payments and no interest or penalties were going to accrue. Right now the forbearance period is set to expire on December 31st unless it is extended.

Joe Biden was asked Monday if student loan forgiveness is in his plans and I think there are actually some things you can pull from his response. Here is a link to a tweet with the clip:

Here are a summary and my thoughts, currently.

Joe says student loan forgiveness does factor into his plan and should be done immediately…….

He was asked if he’d make an executive order to forgive student loans (which would bypass the need for Congress’s approval):

Joe mentions the $10,000 in immediate forgiveness, which was included in a piece of legislation passed by the Democratic House but hasn’t been passed by Congress into law.

Joe talks about making 4-year college education free if your income is under $125,000.

Joe talks about a fundamental change needed in the current student loan public service forgiveness program to include everyone.

All of that said, my previous recommendation to clients to not actively pay principal payments towards their student loans and instead save in a separate account. When/if student loan repayments begin January 1st, it may be worth considering making minimum payments until we have more confidence in the possibility of student loan forgiveness. This is definitely something I’m keeping an eye on.

My thoughts are that it doesn’t seem to be the highest thing on his to-do list and so he may not use his executive power to do so. If that is the case it will have to be passed through Congress, which is where the bill he mentioned previously has been stalled out.

What’s more likely to happen because it’s the easiest thing to do is another extension of the forbearance period. This buys time and has the short-term effect of not squeezing student loan borrowers with an additional payment in the middle of the pandemic.

Regardless, prepare like you’ll have to pay it, which means continue saving your normal payments into a separate savings account and if it is forgiven, you can apply the small sum to another important goal. If the unfortunate thing happens and nothing is forgiven at all, then you can make a large principal payment and reduce the interest that your loans would accumulate.